January 2022 –  In December 2021, the Turkish Competition Board (the “Board”) approved 23 merger control filings and published 40 reasoned decisions. In all, 2021 was a busy year for merger control activity in Turkey. 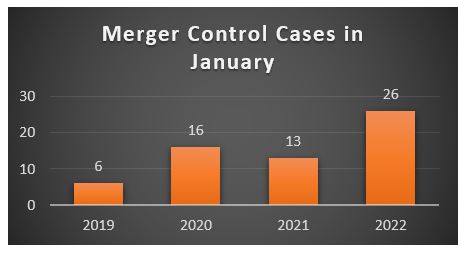 Google decision: An important milestone for the “equality of arms” principle

In May 2021, the 5th Administrative Court of Ankara considered Google’s appeal regarding Google’s application to access the redacted non-confidential versions of the first review report (which initiates the way to launch the preliminary investigation process) and the preliminary investigation report (which leads the way for a full-fledged investigation).[1] The Court found Google’s application to be acceptable within the framework of Law No. 4982 on the Right to Information and ultimately held that the decision regarding the refusal to make available to Google the redacted first review and preliminary review reports was unlawful. Consequently, the Court revoked the Board’s decision and held that Google is entitled to access the redacted version of the reports, which are free of commercial secrets. Subsequently, the Board reconsidered Google’s request and granted access to the relevant reports for the first time.[2] This decision is particularly important in terms of the right of defence and its integral part, the equality of arms principle.

Singer decision sews the way for the settlement and commitment mechanisms

The Board’s Singer decision[3] in September 2021 concerns the settlement offer and commitment package submitted by Singer, which was determined to be in a dominant position in the market for household sewing machines. The allegations imposed against Singer are categorised into two actions, namely (i) resale price maintenance (RPM), and (ii) the non-compete obligation imposed on its dealers. It is significant to determine whether these actions fall under the scope of “hardcore restrictions” based on the grounds that hardcore restrictions cannot benefit from the commitment mechanism, whereas competitive concerns that do not fall under the definition of “hardcore restrictions” may be resolved with the commitment mechanism as well as the settlement process. In this decision, the Board pointed out that RPM is clearly stated as a hardcore restriction within the legal framework of Turkish competition law. On the other hand, non-compete obligations are not considered as hardcore restrictions, thus competition law concerns that stem from non-competition/exclusivity provisions may be remedied through commitments and also qualify for the settlement procedure. The Board accepted Singer’s commitment to remove the non-compete provision included in the dealership agreements. In addition, the Board concluded to end its investigation focusing on the RPM practices based on the settlement letter submitted by Singer and subsequently reduced the fine by 25%.