In October 2022, the Turkish Competition Board (the “Board”) published 56 reasoned decisions, including 32 merger control filings. The highlight of Turkish competition law in October was that the Board opened a comprehensive amendment to Law No. 4054 on the Protection of Competition to public consultation. 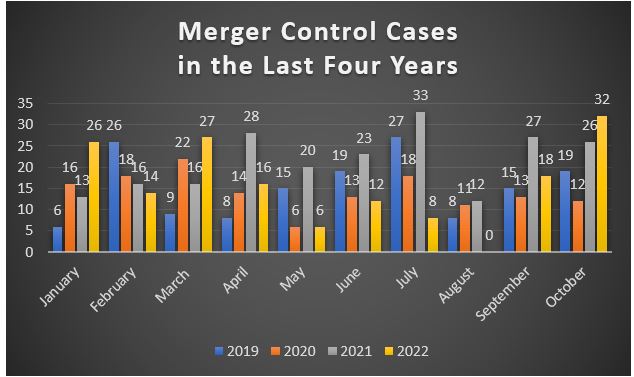 Following the official announcement of the European Union on the Digital Markets Act, the Board shared its draft amendment of Turkey’s main competition law with the public.

Most importantly, the draft amendment introduces the novel concept of an “undertaking with significant market power” and regulates the obligations of such undertakings as well as the sanctions to be applied in the event of breaches. For detailed information, please see our article here.

On 26 October, the Board finalised its investigation against Meta, formerly known as Facebook. In its decision, the Board concluded that Meta infringed Turkish competition law by abusing its dominant position through the data collected from its social networking services and imposed an administrative monetary fine of approximately EUR 18.6 million.

According to the short decision of the Board, Meta abused its dominant position by:

For background information on Meta’s infringement of competition rules in Turkey, see our article here.

The Board revisits its decision on Johnson & Johnson

In 2019, the pharmaceuticals company Johnson & Johnson applied to the Board to obtain an exemption for the vertical agreement to establish a selective distribution system between itself and nine pharmaceutical warehouses. In its decision dated 3 September 2020, the Board concluded that the agreement submitted by Johnson & Johnson can neither obtain a negative clearance certificate nor be exempted under Turkish competition rules, on the ground that selective distribution systems cannot be applied to medical products (i.e., medicines to treat cancer and psoriasis) to be distributed within the scope of the submitted agreement.

However, the the court of first instance annulled the decision of the Board. Following the court’s rendering, the Board made a further assessment and concluded that the vertical agreement in question can benefit from the block exemption within the rationales stated in the court’s decision, such as: (i) the proposed distribution system can benefit from the block exemption, as the market shares of the relevant products do not exceed the legal threshold of 30%; (ii) Johnson & Johnson applies objective criteria to the warehouses; and (iii) the accessibility to the relevant products is not decreased with the proposed agreement.

The Board concluded its investigation against alcoholic drinks producer and distributor Mey İçki, owned by Diageo, in which it examined allegations that Mey İçki abused its dominant position by complicating the activities of its competitors through the provision of financial aid and investments to its final sales points. On 12 October, the Board announced that it had ended its investigation without fines by finding that the commitment package submitted by Mey İçki is sufficient to eliminate the Board’s competition concerns.

In October the Board published its reasoned decision on Yemek Sepeti, an online ordering and food delivery platform owned by Delivery Hero. In its decision, the Board evaluated allegations that Yemek Sepeti engages in various practices aimed at compelling the restaurants operating on Yemek Sepeti’s platform to not operate on rival platforms.

Alongside the allegations, the supposed asserted methods applied during the indirect prohibition applied by Yemek Sepeti to the member restaurants are as follows:

Considering (i) the statements of member restaurants indicating that Yemek Sepeti was not involved in any manipulation of customer reviews to force member restaurants to not work with competing platforms, (ii) the lack of solid evidence showing any possible infringement, and (iii) the current competitive landscape of the market, the Board ended its preliminary investigation without opening a full investigation.