June 2020 – The most important competition law development in May was the Draft Proposal to Amend the Competition Law (the “Draft Bill”), which is covered below.

With regards to merger control activity, May was the month that the effects of the global recession started to be felt in Turkey. The chart below shows the decline in the number of merger control decisions issued by the Turkish Competition Authority (“TCA”) and the number of new transactions notified to the TCA. This is mainly due to the global and national decline of M&A activity.

In order to keep pace with the digital economy, on 8 May 2020 the TCA published an announcement regarding the strengthening of its already existing Strategy Development Department by expanding its authorities. We examine this important reorganisation for the digital economy in this article. 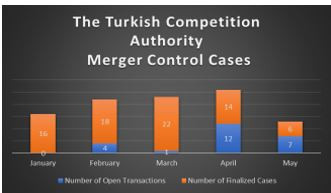 Among its important proposals, that the Draft Bill aims to replace the current dominance test for merger control with the Significantly Impeding Effective Competition test (the “SIEC”) that is also applied by the EU.

The Draft Bill would also formally introduce the remedies mechanism to Turkish law. Under the proposed rules, the TCA would be able to impose behavioural and/or structural changes on undertakings in order to cease anti-competitive behaviour and re-establish competition in the relevant market. Structural remedies can be imposed if behavioural remedies are insufficient. The TCA currently enjoys such powers through the interpretation of the current rules, but the Draft Bill introduces a clearer framework that is akin to EU Competition Law.

Another concept to be introduced by the Draft Bill if approved is the de minimis doctrine. Under this principle—similar to the implementation of the de minimis doctrine in the EU—agreements of minor importance would not be pursued by the TCA. Details such as market share and turnover thresholds will be set by the TCA via a new communiqué on this issue after the Draft Bill has been enacted.

Lastly, the Draft Bill would introduce the commitment and settlement procedures that are currently lacking in Turkish law:

After a series of harsh statements, in May the TCA initiated investigations against 29 undertakings regarding excessive price increases implemented after the COVID-19 outbreak. The undertakings  subject to the investigation are operating in the sectors of food production, organised retail (supermarkets) and manufacturing of cleaning/hygiene products. The TCA indicated that it has been gathering evidence on anticompetitive behaviour for over one month and is planning to conclude the investigation as quickly as possible.

The TCA approved the following merger control filings in May at the Phase I stage: