July 2020 – The most important Turkish competition law development in June was the enactment of a law that entered into force on 24 June 2020, bringing significant amendments to Law No. 4054 on the Protection of Competition (“Turkish Competition Law”). These changes aim to bring competition legislation in Turkey much more in line with the EU competition law. For more details on this please see our article on this topic.

Merger control activity appears to have returned to pre-pandemic levels, as in June the number of decisions issued by the Turkish Competition Authority (“TCA”) increased more than two-fold compared to the previous month.

However, although the effects of the pandemic on merger control activity seem to be starting to wear off, the TCA nevertheless postponed a total of nine oral hearings set for June and July to an unknown date due to Covid-19-related risks, per the requests of the undertakings. 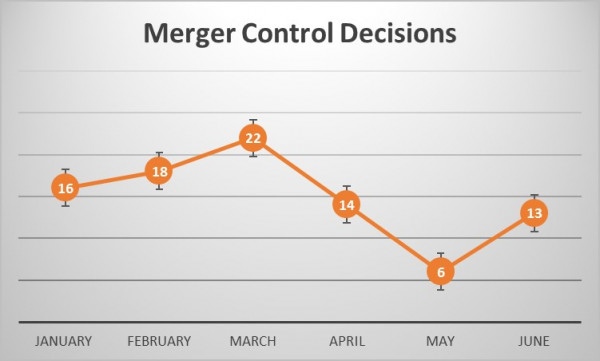 Watch out for your WhatsApp correspondences

In June the TCA published its reasoned decision following its investigation of ten gas stations operating in the Southwest Anatolian city of Burdur for fixing the prices of auto gas, LPG, and fuel oil. The TCA imposed an administrative fine of 0.2% of annual turnover on each of the six undertakings.

The important point of this decision is that the TCA based its findings on correspondences of a WhatsApp group consisting of the competitors’ employees. In its decision, the TCA stated that all manner of physical and/or electronic documents of any type of digital asset used by the undertakings to carry out their commercial/professional activities can be examined, and that the WhatsApp conversations were related to commercial activity and not private. The decision provides detailed analysis on the issue and sheds light on the on-going debate on whether the TCA has the authority to examine correspondence on messaging apps and social media.

In response to price hikes at the beginning of the global pandemic, the TCA initiated an investigation into 29 undertakings active in the production of food and hygiene products and in organised retail (supermarket chains). After its initial review, the TCA issued an interim decision that requires the undertakings under investigation to provide information on any increases in the prices of food and hygiene products. The TCA indicated in its decision that it is investigating whether the price hikes can be deemed to constitute an abuse of dominance or a hub & spoke cartel.

The TCA approved the following merger control filings in June at the Phase I stage: